Which Patients should be Reported to the Registry?

The ECFS Patient Registry is a longitudinal study. It recruits all the prevalent cases on 1st January 2008 and all the subsequent incident cases. 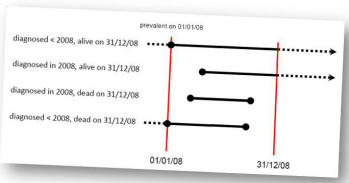 What are the inclusion criteria?

Only patients who fulfil the diagnostic criteria below should be included in the registry:

If the sweat value is less than or equal to 60 mmol/L, then at least 2 of these should be fulfilled:

b. Transepithelial (Nasal) Potential Difference - study consistent with a diagnosis of CF.

In case of certain diagnosis reversal you should inform the registry in order to have this patient's records deleted from the registry.

Gibson LE, Cook RE. A test for concentration of electrolytes in sweat in cystic fibrosis of the pancreas utilizing pilocarpine by iontophoresis. Pediatrics 1959;23:545-49